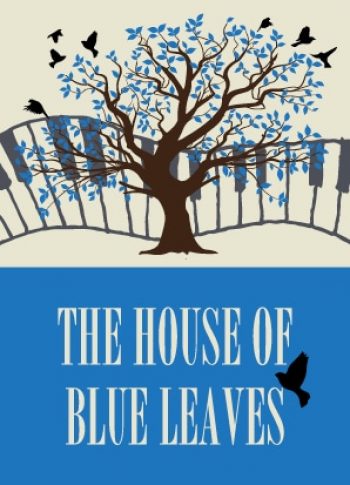 THE HOUSE OF BLUE LEAVES

TICKETS
Reserved Tickets – $15.00 each
Performed in the Marla Eichmann Studio Theater
Suggested for Mature Audiences only due to adult content.

Artie Shaugnessy is a songwriter with visions of glory. Toiling by day as a zookeeper, he suffers in seedy lounges by night, plying his wares at piano bars in Queens, New York, where he lives with his wife, Bananas, much to the chagrin of Artie’s downstairs mistress, Bunny Flingus, who’ll sleep with him anytime but refuses to cook until they are married.

On the day the Pope is making his first visit to the city, Artie’s son Ronny goes AWOL from Fort Dix, stowing a homemade bomb intended to blow up the Pope in Yankee Stadium. Also arriving are Artie’s old school chum, now a successful Hollywood producer, Billy Einhorn, with starlet girlfriend in tow, who holds the key to Artie’s dreams of getting out of Queens and away from the life he so despises. But like many dreams, this promise of glory evaporates amid the chaos of ordinary lives.

Suggested for Mature Audiences only due to adult content.

Produced by arrangement with Concord Theatricals