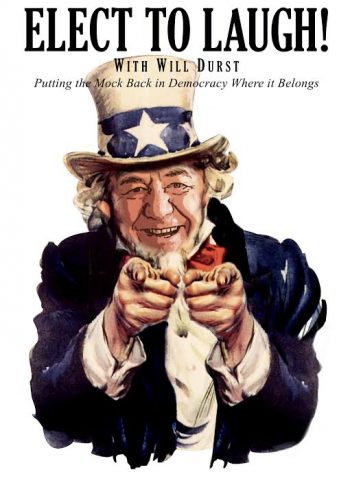 ELECT TO LAUGH! with Will Durst

Elect To Laugh: 2016 with Will Durst is a brand-new, hysterical, one-man show stalking the presidential election cycle like white on rice. Ably assisted by his trusty overhead projector, this hilarious 80 minute production reflects Durst’s outraged and outrageous sensibilities, accessing the topical through the jugular. Will Durst promises to be an equal opportunity offender!

Winston Churchill called the American political process a circus wrapped inside a game show covered in poisonous weasel glitter. Well, he should have. And both sides of the partisan aisle can’t help but agree that the 2016 election season has spawned one of the most fertile, febrile and fecund campaigns in history. For mocking and scoffing and taunting purposes, that is. As a source for comedic material it has been an embarrassment of riches. Lush like a tropical rain forest. A cornucopia of delights. Like slam-dunking from a step-ladder.

Co-authored by the best joke writers in the business: Donald Trump, Ted Cruz, Marco Rubio, Hillary Clinton, Jeb Bush, Bernie Sanders and Barack Obama, not to mention the ubiquitous Sarah Palin, and ably assisted by the 535 hard working satirists in Congress — this show is more bipartisan than an Apple Pie Day Proclamation. Every political stance is taken to task with extra-special attention paid to the irredeemably dim. Of which there is more than a little.

Elect to Laugh: 2016 hits the hypocritical where it hurts. Chronicling the country’s path through the primaries, debates, ads, mud, spin, tears, flip-flops and flop-flips. It is comedy for people who read or know someone who does. Political comedy for folks who don’t like politics.

Acknowledged by peers and press alike as one of the premier political satirists in the country, Will Durst has patched together a comedy quilt of a career, weaving together columns, books, commentaries, acting, voice-overs and most specifically — stand up, into a hilarious patchwork of outrage and outrageous common sense, guided by his abiding motto, “You can’t make stuff up like this.” The New York Times calls him “possibly the best political comic working in the country today.” Fox News agrees, “he’s a great political satirist,” while the Oregonian hails him as a “hilarious stand-up journalist.” This former radio talk host, oyster shucker, and margarine smuggler currently writes a nationally syndicated humor column, and his scribblings have appeared in Esquire, George, the San Francisco Chronicle, National Lampoon, The New York Times and scads of other periodicals. He is a 5 time Emmy nominee; has been fired by PBS three times; told jokes in 14 countries; racked up 7 nominations for Stand-Up of the Year; and his 800+ television appearances include Letterman, HBO, Showtime, CNN, ABC, CBS, NBC, Fox News, the BBC and many more. His hobbies include pinball, the never-ending quest for the perfect cheeseburger and his heroes remain the same as when he was 12, Thomas Jefferson and Bugs Bunny.

Durst’s performances are made possible by the 1st Amendment to the Constitution of the United States.

Samples of the show.

Can’t wait for the Sanders – Trump debate when Bernie chews up The Donald but then has to spit him out due to religious dietary laws.

Donald Trump says he wants to run the country like a business, which is worrisome, because he looks like the kind of guy who would burn it down for the insurance.

Good news out of the Bernie Sanders camp. The candidate just got a clean bill of health from his paleontologist.

Obama could discover a cure for cancer and Republicans would complain he’s anti-Big Pharmaceutical.

Ted Cruz is quite mad. Doubt if he could win a majority of the voices in his own head.

One thing Donald Trump has right. If he’s elected President, Mexico will indeed build a wall. To control our immigration.

Trying to make Hillary Clinton cuddly is like gluing goose down to the side of a barracuda.

No matter what you think of Obama’s policies, you got to admire his ability not to get involved with them.

“He’s perfected a verbal jitterbug of comedy, taking on politics and war and rhetoric.” The New Yorker Magazine.

“A great political satirist. One of the funniest guys around.” Fox News

“One of the greatest commentators of all things political. He’s one of the best.” Rachel Maddow.

“Will Durst might possibly be the best political comic working in the country today.” The New York Times.

*Suggested for mature audiences only due to content and language