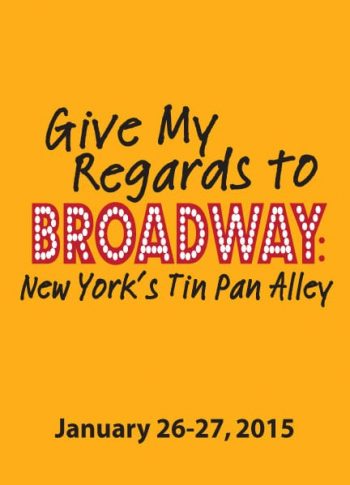 GIVE MY REGARDS TO BROADWAY

Yes, Virginia, there really was a Tin Pan Alley. From around 1885 to the 1920’s, this New York City enclave was the music publishing capital of the world. Legend has it that a newspaper writer coined the term because all those pianos being pounded in publishers’ demo houses sounded like hundreds of people banging on tin pans. But don’t be fooled by all that craziness. The era produced folks like George M. Cohan, Irving Berlin, Harold Arlen, and Sammy Cahn–Broadway’s founding fathers.

We’re very excited to welcome accomplished music director and performer Ruben Piirainen for his first time at our Musical MainStage piano, where he’ll be joined by Tim Karth on drums.

Songs from the era include Alexander’s Ragtime Band, Sweet Georgia Brown, and Cheek to Cheek. Let’s chase away our winter blues with some good old fashioned, they-don’t-write-’em-like-that-anymore sing-along (we don’t mind) classics.