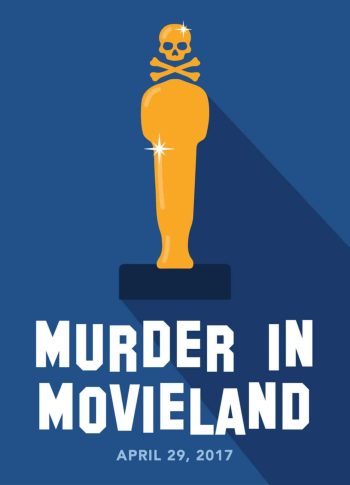 Join us for our Murder Mystery Fundraiser. Enjoy this inter-active murder mystery complete with an appetizer buffet, full cash bar and your chance to win valuable raffle prizes. Have a great time and enjoy a tax write-off!

Welcome to Hollywood’s biggest night – the annual awards ceremony of the Academy of the Art and Science of Motion Picture Acting. All of movieland’s top stars will be there…including one killer. Who will the victim be? What is the murderer’s motive?

Could the killer be the cowboy star turned presidential candidate? Or the hostess of TV’s syndicated household hints program? Perhaps the victim is America’s foremost Elvis impersonator, or maybe the crazed fan club president.

The possible reasons run the gamut…jealousy, blackmail, ambition, wealth, revenge and passion. Who knows what secrets lurk in the heart of one of your favorite stars?

Cecil B. DeSpielberg * – The most powerful and despicable producer in Hollywood, Cecil owns the largest film studio, a TV network, a string of Las Vegas nightclubs, as well as the contracts for Hollywood’s leading stars.

Cherdonna – Hollywood’s most notorious rock star, Cherdonna is known for her torrid off-screen romances and her sizzling videos.

Otto Von Struedel – Hollywood’s most tyrannical and dictatorial director, Otto is now looking for that one special film that will once again put him on top.

Mona Desmond – Hollywood’s most famous – and ruthless – movie star, Mona won’t let anyone or anything get in her way of collecting the “Best Actress” award at tonight’s ceremony.

Rex Ebert – Hollywood’s leading movie critic and gossip columnist, Rex has ruined many a career…and a life…with his stinging criticisms.

Princess Dimples LaTour – The former Queen of Burlesque and a leading Las Vegas showgirl, Dimples is now married to British royalty. She’s back in Hollywood to settle a few old scores.

Rock Hunk – Hollywood’s top romantic leading man and skirt-chaser, Rock has eyes for only one person; the one he sees in the mirror.

Jeeves Belvedere – Mona Desmond’s loyal butler and confidant for the past 25 years, Jeeves knows which closets are hiding the skeletons.

Olivia Dehavalot – Former Miss America and Mona Desmond’s identical twin sister, Olivia has been in bitter competition with her sister all her life.

Tex Giddyup – Hollywood’s top cowboy star, Tex is trying to lasso the White House as he runs for president.

Eve Herringbone – Aspiring actress as well as understudy and stunt double for Mona Desmond, Eve swears she’ll do anything to become a star…anything.

Clovis Presley – Elvis’ cousin twice removed and the nation’s foremost Elvis impersonator, Clovis finds he’s occasionally on the wrong side of the law.

Vivian Gusher – International president of the “Mona Desmond – Now and Forever or At Least Until She Drops Dead” Fan Club, Vivian finds that every day she identifies more and more with her favorite star.

by Dick and Vickie Katschke