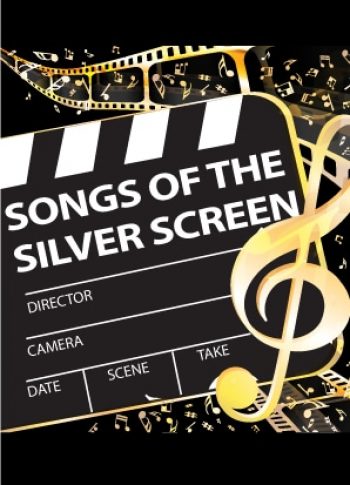 SONGS OF THE SILVER SCREEN

From the first “talkies” to today’s modern movie musicals, songs from the silver screen have become the background music of our lives. Songs that made their first appearances in the movies and are now standards that have lasted for decades–Singin’ in the Rain, Moon River, Over the Rainbow, As Time Goes By, The Way We Were, and When You Wish Upon A Star. The show also features excerpts from the great cinematic scores of John Williams and Henry Mancini. From THE JAZZ SINGER to GHOSTBUSTERS, celebrate nearly 100 years of musical movie magic.

ALISON MARY FORBES (Performer)
Alison Mary is pleased to return to the SideNotes stage, where she appeared in THE HARMONETTES. She has worked with Skylight Music Theatre, Milwaukee Opera Theatre, Milwaukee Chamber Theatre, and many others – including multiple turns in bug in a rug and Musical MainStage concerts at Sunset Playhouse. Notable credits include Dot (SUNDAY IN THE PARK WITH GEORGE), Sheila (HAIR), Mary (JESUS CHRIST SUPERSTAR), and Sally (YOU’RE A GOOD MAN, CHARLIE BROWN).
FAVORITE MOVIE MEMORY: When I was a kid, I watched the rental videotape of NEWSIES so many times that the tape broke and we had to buy it from Blockbuster.

CHRIS KRASOVICH (Performer)
Chris has been fortunate enough to work for many wonderful area theaters over the years, including Skylight Music Theater, Broadway Baby Dinner Theater, and M&W Productions. Favorite roles include Lili/Kate (KISS ME KATE), a ten-month run as Woman 1/Jennifer (I LOVE YOU, YOU’RE PERFECT, NOW CHANGE), Mabel (PIRATES OF PENZANCE), and most notably, Mom of Two, in her favorite show of all time, running now for an unlimited engagement.
FAVORITE MOVIE MEMORY: I slept through my first viewing of STAR WARS at the drive in. But to be fair, I was five and it was shown second in a double feature.

JIM RYAN (Drums)
Jim returns to the SideNotes stage where he recently performed in OUR FAVORITE THINGS – A TRIBUTE TO JULIE ANDREWS. He also will participate in four other SideNotes cabarets this season. Jim has worked with Steve Lippia, Bobby Shew, and the legendary Louie Bellson. He appears regularly with big bands (JAZZ EXPRESS, SWING EXPLOSION), and with smaller combos (ELLEN WINTERS GROUP, CHRIS MARIANI). He keeps busy leading clinics, freelancing, and maintaining a private drum instruction studio.
FAVORITE MOVIE MEMORY: W.C. Fields in THE OLD-FASHIONED WAY: “I hope Baby Leroy hasn’t hurt your watch.” “Oh, no – how can you hurt a watch by dipping it in molasses?”

GREG SMRZ (Music Director, Performer)
Greg is thrilled to be making his debut at Sunset Playhouse. In fact, this is his first theatrical endeavor since WEST SIDE STORY in college! Greg is Assistant Accompanist at St. Teresa of Calcutta Parish in North Lake/Monches. He also is a regular cantor at St. Sebastian, Milwaukee and is entering his third year with the Milwaukee Symphony Chorus. Being able to express his love of music would not be possible without the support and understanding of his wife, Lorinda, and their two daughters.
FAVORITE MOVIE MEMORY: My first R-rated movie was THE AMITYVILLE HORROR, which I saw in 8th grade – I don’t think I slept for the next week.

BECKY SPICE (Writer, Director)
For more than 25 years Becky has been a regular at Skylight Music Theatre where favorite roles include Reno (ANYTHING GOES) and Eliza (MY FAIR LADY). A frequent soloist with the Racine Symphony Pops Orchestra and a radio/TV jingle singer, she also has performed with First Stage Children’s Theatre, Milwaukee Repertory Theater, and Madison Repertory Theater. Sunset audiences know Becky from her many Musical MainStage and SideNotes Cabaret appearances and from her one-woman show RED HOT MAMA! – a tribute to the extraordinary Sophie Tucker.
FAVORITE MOVIE MEMORY: I cried so hard after TERMS OF ENDEARMENT the usher had to escort me out when the lights came up–embarrassing!