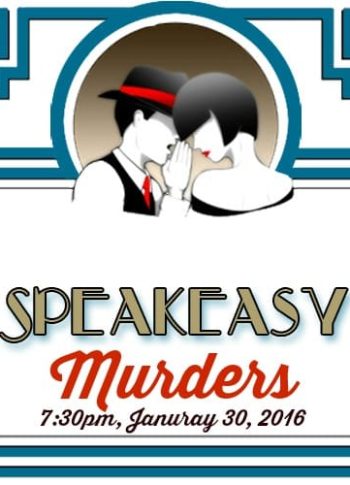 Join us for our Murder Mystery Fund Raiser: The SpeakEasy Murders – A Murder Mystery Comedy.
This Sunset Fund Raiser features an appetizer buffet, a raffle of valuable prizes, and an evening of laughs. Directed by Vickie Katschke with Ralph Garcia.
Blackfinn Ameripub, a new restaurant opening at Brookfield Square in February, will be with us: providing wonderful appetizers and gift certificates for our raffle. If you win a raffle, you will be among the first to enjoy this great new restaurant!

It’s the Roaring ’20’s, and you’re welcomed to the Grand Re-Opening of Chicago’s favorite speakeasy, Chez Knuckles. The club has been closed down since the tragic murder last Valentine’s Day of its co-owner Knuckles Knock-Knees. For tonight’s re-opening, the bathtub gin will be flowing and the Charleston will be the rage as all of gangland’s favorite mobsters and movie stars, flappers and floozies, gun-molls and gamblers, and chorus girls and coppers will be attending…including the person who bumped off Knuckles.

Brush up your detective skills as you determine the motives and means of tonight’s suspects.

The August Murder Mystery sold out so get your tickets early and join the fun.

*Ace O’Diamond – Co-owner of Chez Knuckles and Chicago’s top gambler. Now that Knuckles is gone, he’s Godfather of the West Side Mob. Did he roll snake-eyes for murder?

*Madam Trixie Hottatrot – Knuckles’ sister and owner of Chicago’s most notorious “finishing school for wayward chorus girls.” Trixie may have hated her brother, but she liked his bank account.

Helena Handbasket – Cigarette girl and photographer at the club, Helena was also Knuckles’ main squeeze. Did she give him the kiss of death?

Chauncey Milktoast – Legal counsel and financial advisor to all of Chicago’s top mobsters, Chauncey knows where all of gangland’s skeletons are buried.

Sonya Harding – Knuckles’ estranged daughter and an Olympic ice-skating hopeful, Sonya’s got her eye on the gold; both a medal and her father’s fortune.

Hortencia Gerrymander – Chicago’s leading socialite and wife of the city’s mayor, Hortencia likes to give in to her wild side and slip away to the club. Could she also be capable of murder?

Chief Patrick O’Hooligan – As Chicago’s Chief of Police, Patrick is the best cop that money can buy. Now he’s also a candidate for mayor of the city. Is he on the take, or did he take Knuckles’ life?

Spats Stiletto – Godfather of Chicago’s South Side Mob, Spats controls the gambling action in the city. He’s also Chicago’s most notorious ladies’ man. Was Knuckles trying to romance someone in Spats’ harem?

Prudence T. Totaller – Leader of Chicago’s Temperance Movement, Prudence has been waging a battle with Knuckles and Ace as she tries to rid the city of sin and vice. Does she have a past we don’t know about?

Ms. Lola DeMeanor – Torch singer at Club Knuckles, Lola is almost recuperated from her most recent breakdown. Lola is madly in love with Ace; she becomes insanely jealous of anyone else he’s with.

K.O. Palooka – Former world welter-weight champion and now bouncer at Chez Knuckles, K.O. has a weakness for the ponies. Will the clues win, place or show us that he’s the murderer?

Madam X – The only witness to Knuckles’ murder, Madam X went into shock and now suffers amnesia. Who is this mysterious lady, and will she regain her memory before the murderer bumps her off?