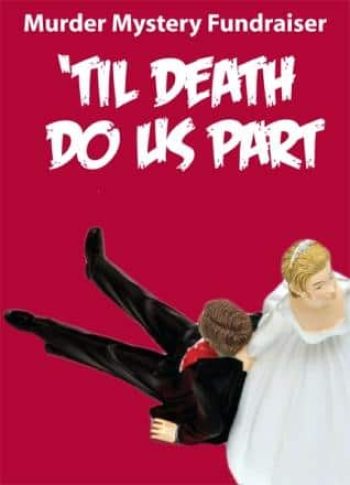 ‘TIL DEATH DO US PART

This is a Special Event – Pick and Choose Flex Vouchers, Sunset Vouchers,  Sunset Gift Certificates, Entertainment Coupons, or any Sunset Playhouse special offers, are not valid for this show.

Join us for our Murder Mystery Fundraiser. Enjoy this inter-active murder mystery complete with an appetizer buffet, full cash bar and your chance to win valuable raffle prizes. Have a great time and enjoy a tax write-off!

You’re cordially invited to the long-awaited nuptials of corporate tycoon Donald Trumpet and chorus girl Marla LeMoxie.  The wedding will blend Donald’s high society family with Marla’s kin from the Ozarks — and the results may be deadly.

Why would anyone consider murder at a happy occasion like this?  Will the victim be the bitter ex-wife, the loyal secretary, or the mob’s “godfather”?  Could the killer be the hunky best man?  Or perhaps the jilted maid of honor?   Even the butler may be tonight’s murderer.

The possible reasons run the gamut…revenge, greed, passion, jealousy, and ambition.  All the secret motives of the wedding party and guests will be revealed.

Keep your eyes open and listen for clues.  And be on your guard…or you may become a victim.

Donald Trumpet * – America’s most notorious business tycoon, multi-trillionaire Donald  Trumpet clawed his way to the top of the corporate ladder — at the expense of almost everyone else.

untimely death of   her late husband.

are linked to the Trumpet family.

Marla LeMoxie  – A former chorus girl and now star of the Broadway musical, “Tequila  Mockingbird,” Marla LeMoxie plans to parlay her marriage to Donald into a career  as a Hollywood star.

Cherdonna – The entertainer at tonight’s wedding and Marla’s understudy on Broadway, Cherdonna will stop at nothing as she tries to break into show

Uncle Vito DeGangsta – Marla’s uncle and her “godfather”, Vito heads the local mob.   Nobody crosses Vito and gets away with it.

Rocco Harley – The leader of a notorious biker gang, Rocco Harley has come directly from prison to tonight’s wedding.  He wants to finally meet his pen-pal, Marla.

Laverne LeMoxie – The proud mother of the bride has traveled all the way from the Ozarks to see her daughter marry money.  Laverne hopes no one finds out about her illegal businesses.

Fabio Pepsodent – Donald’s business partner and his best man, Fabio’s rugged good looks have made him a business and romantic success.

Ivana B. Velthy – Nothing hath the fury of a woman scorned.  Just ask Donald’s bitter ex-wife, who is now the last Playboy bunny cocktail waitress in the United States.

*    Performed by actors from Scene of the Crime Productions, Inc.

by Dick and Vickie Katschke