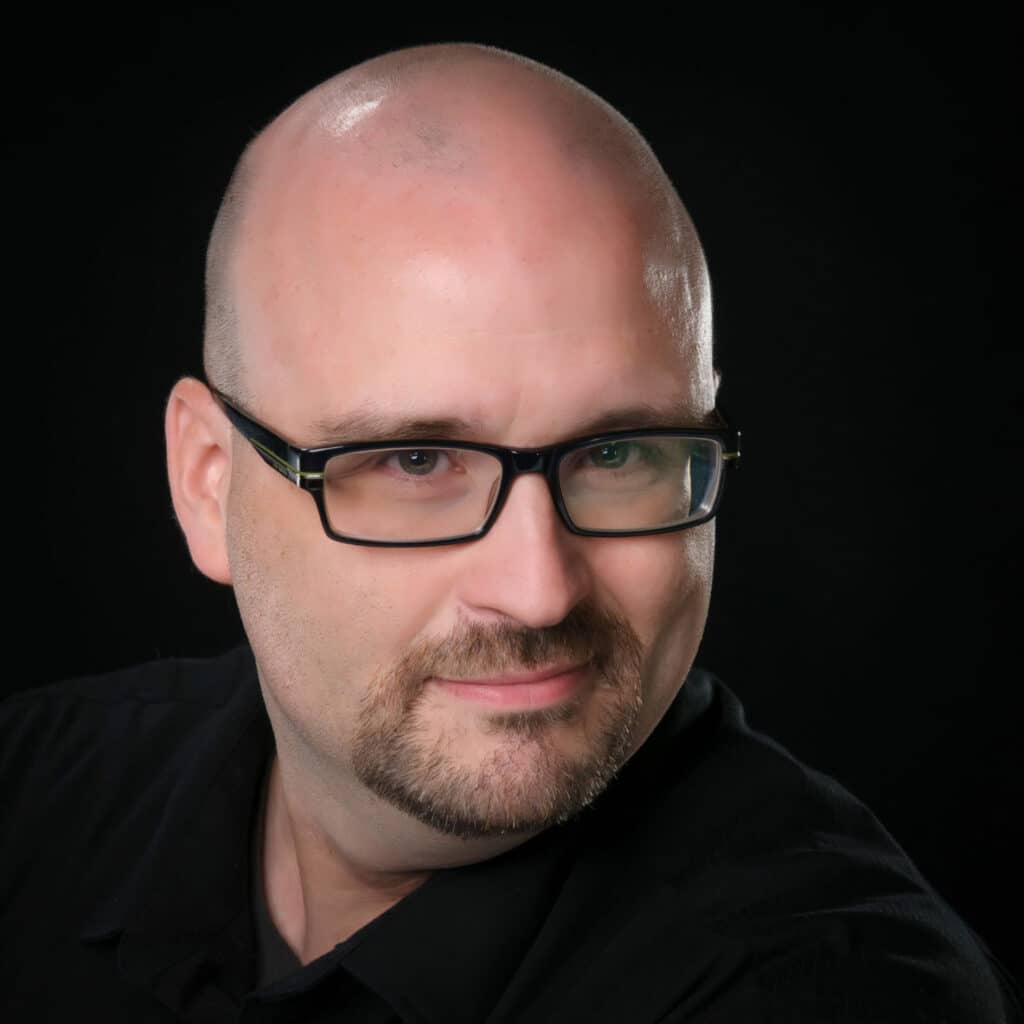 Dustin J. Martin now in the Sunset Spotlight.  Dustin is currently directing our After Sunset show: BETRAYAL which runs April 5 – 8, 2018 in our Studio Theatre.

When did you first become involved at Sunset Playhouse and what areas have you been involved with here at the Playhouse?

My first show with Sunset was acting in LOVE, SEX, AND THE IRS back in 2011. Since then, I performed in 12 ANGRY MEN and OVER THE TAVERN and directed MIRACLE ON 34TH STREET and last season’s THE DIXIE SWIM CLUB.

I am directing BETRAYAL as part of the After Sunset series. I was introduced to this play in an acting class back in college way-too-many years ago. Ever since then, this show has been at or near the top of my wish list to either perform or direct. I am thrilled to have the opportunity to do so here at Sunset!

My favorite role I’ve ever had the chance to play was Norman Bulansky in my collegiate production of THE BOYS NEXT DOOR. My dream roles include Biff in DEATH OF A SALESMAN and Benedick in MUCH ADO ABOUT NOTHING.

On the directing side, my dream plays would be HAMLET, HEDDA GABLER, and CAT ON A HOT TIN ROOF.

I love and appreciate the hard-working dedication of everyone who is involved in producing great work here – especially those who volunteer their time. In my experience, the volunteers here are second-to-none. I have also formed many long-lasting friendships as a result of my work here which I value highly.

To say that I stay busy would be an understatement. By day, I work in communications for the Medical College of Wisconsin.

Theatrically speaking, I am the artistic director for SummerStage of Delafield, an outdoor theatre located in the Kettle Moraine State Forest, and I’ve directed and acted at other theatres throughout the area. I am on a mission to see all of Shakespeare’s plays on stage or on screen (only 6 to go!), which has largely been accomplished by frequent visits to the Stratford Festival in Ontario.

My hobbies include playing board games, seeing movies, ancestry research, Academy Award prognostication, hanging out with friends, going on family road trips, and spending as much time as I can with my wife and four daughters (ages 15, 15, 13, and 10).

Some of these it is difficult to pick just one, and it might differ depend on what day I am asked!

Color: Black
Food: Nachos and Brandy Old Fashioneds (not necessarily at the same time, but it helps)
Movie: RAIDERS OF THE LOST ARK
TV show: SEINFELD
Book: THE ELFSTONES OF SHANNARA by Terry Brooks
Musical: LES MISÉRABLES
Play: MUCH ADO ABOUT NOTHING

This above all: to thine own self be true,
And it must follow, as the night the day,
Thou canst not then be false to any man.

BETRAYAL is a powerful play by one of the 20th century’s greatest playwrights. Its unique storytelling structure (the events of the play are depicted in reverse order) creates heightened tension on everything the characters do – from the things they say to their posture to even glances with the eyes. Don’t miss it!