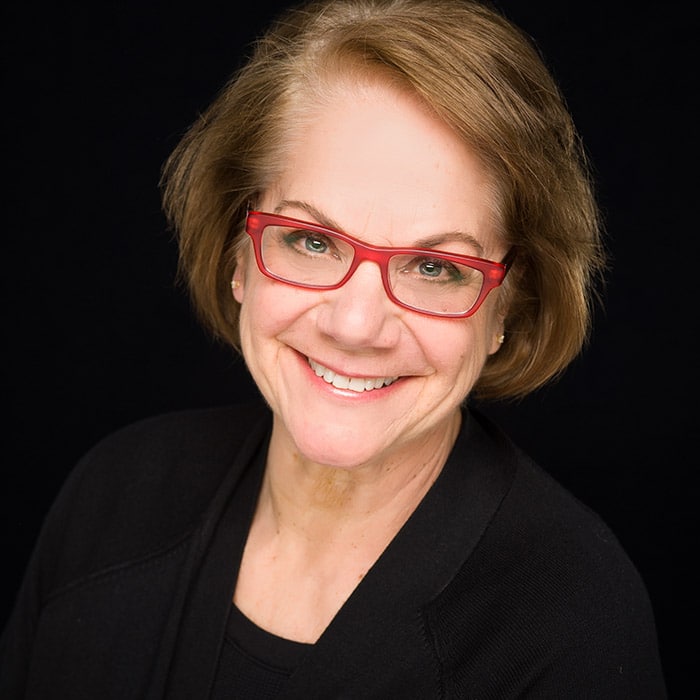 Susan Loveridge, a Sunset Life Member and Producer of the popular Musical MainStage Concert Series, now in its 11th season, plays Golde in our production of FIDDLER ON THE ROOF Oct 13 – Nov 6, 2016. Her thoughts for the Sunset Spotlight:

My first audition for a musical came in 1968 when I was a freshman at UWM and, on a lark, accompanied a college buddy who wanted to be in a production of a relatively new show called Fiddler on the Roof. She wasn’t cast; I somehow landed the part of Chava, one of Tevye’s daughters. Unfortunately, the student director hadn’t bothered securing rights to the show so it was cancelled before our first performance. Flash forward twelve years to a community theater production in which I was thrilled to be cast as Golde (though probably a bit too young for the role). Zip forward another 35 years and I’m happily Golde once again (probably a drop too old). As a Jewish mother and grandmother, the play and the role have always been close to my heart. And as one whose family fled European pogroms many times, this beautiful story holds very special meaning.

I first walked into Sunset Playhouse to audition for the 1972 summer production of West Side Story. What a blast! A couple dozen college kids performing one of musical theater’s greatest scores. The friendships formed that summer, including with mentors Alan and Mary Furlan, Mary Strong, Gunnar Granquist and so many others, cemented my love for this place. I lived out of state for 13 years (in Houston, Louisville and Cincinnati) but from that long-ago summer, Sunset has always been part of my life.

When I moved back to town, I was afraid I’d discover that you can’t go home again. And it was true that some friends were no longer around and the building had been transformed. But the spirit of the place, its heart and soul, were unchanged. I made new friends. I think I’ve served in almost every capacity around the theaterÔÇöstage manager, props, board member, committee chairÔÇöand now, of course, I’m delighted and very proud of my baby , the professional Musical MainStage Concert Series. I can’t believe we’re in our eleventh season! Working with professional singers and musicians for appreciative audiences has become my passion. And because I serve as a volunteer while wearing all my hatsÔÇöproducer, director, scriptwriter, narratorÔÇögiving back has become my purpose.

I never did graduate from college; Sunset Playhouse is my alma mater. The connections made hereÔÇöthe work that we’ve done, the love that we’ve sharedÔÇöthat’s the stuff of which lives and legacies are made. I appreciate being in the spotlight today but I’m most grateful for this safe harbor which has defined so much of my life. Just before each performance, our beloved Alan Furlan would command, Up, up, up and I know that long after I’m gone a whole new generation will carry this place, this story, onward and upward.