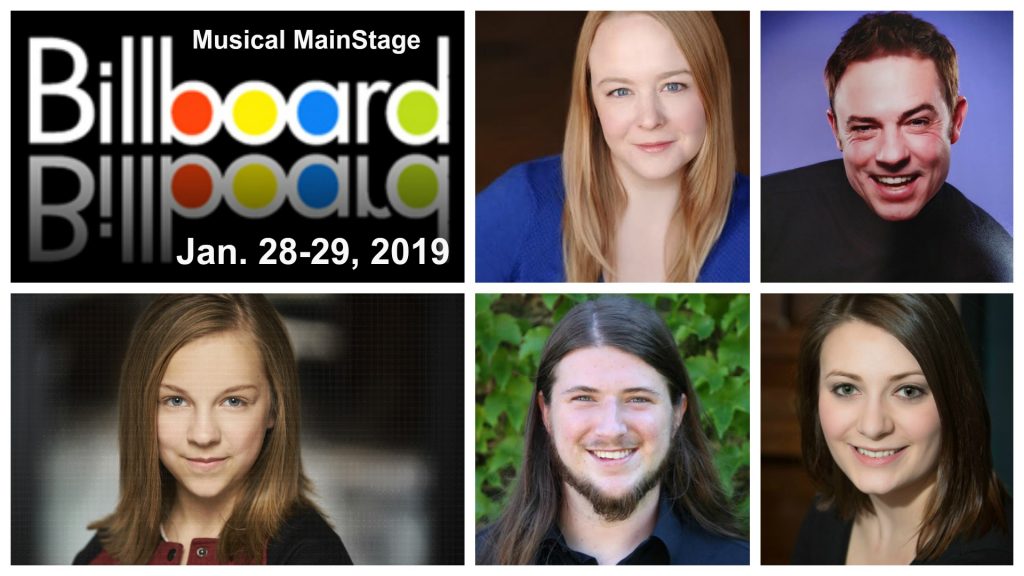 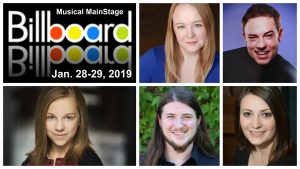 Five of the area’s busiest performers will kickstart the new year with Billboard’s Best–a salute to some of the music industry’s biggest, chart-topping hits:

TOMMY LUECK was featured in our very first Musical MainStage concert and many more over the years. He’s probably best known as the front man vocalist for Swing Nouveau and as one quarter of the Four Guyz in Dinner Jackets, but he’s also a remarkable director of musicals, both at Sunset Playhouse and for his students at Brookfield Central High School.

CASEY OLSON, singer and guitarist extraordinaire, has quickly risen to cult status around the Playhouse, with credits that include YOU’VE GOT A FRIEND: A TRIBUTE TO CAROLE KING & JAMES TAYLOR; HOMEWARD BOUND: SIMON AND GARFUNKEL; and QUEENS OF COUNTRY. This season brings half a dozen more appearances for both the SideNotes Cabaret and Musical MainStage series.

It’s always fun to introduce a new performer to our family. This time around we welcome HAYLEY SAN FILLIPPO. With a BFA in Theater Performance from UW-Whitewater, her area credits include work with First Stage Children’s Theatre, All in Productions, ComedySportz, Soulstice Theatre, Alchemist Theatre, Greendale Community Theatre, and Sunset Playhouse.

In her second Rising Star appearance, we welcome back KYLEE HENNES, who has wowed our audiences with her talent as both vocalist and bass guitar player. Recent credits include THE BAD SEED (Sunset), ANNIE and VIOLET (Skylight Music Theatre), and THE SOUND OF MUSIC (Lyric Opera of Chicago). KyLee also rocks out with her sisters in the BAND Hennes.

On keys will be superstar music director KERRY HART BIENEMAN. She’ll be joined by our resident drummer-man, TIM KARTH, along with Susan Loveridge and Bob Hirschi in the play-by-play chairs. You’ll be All Shook Up if you miss this one!