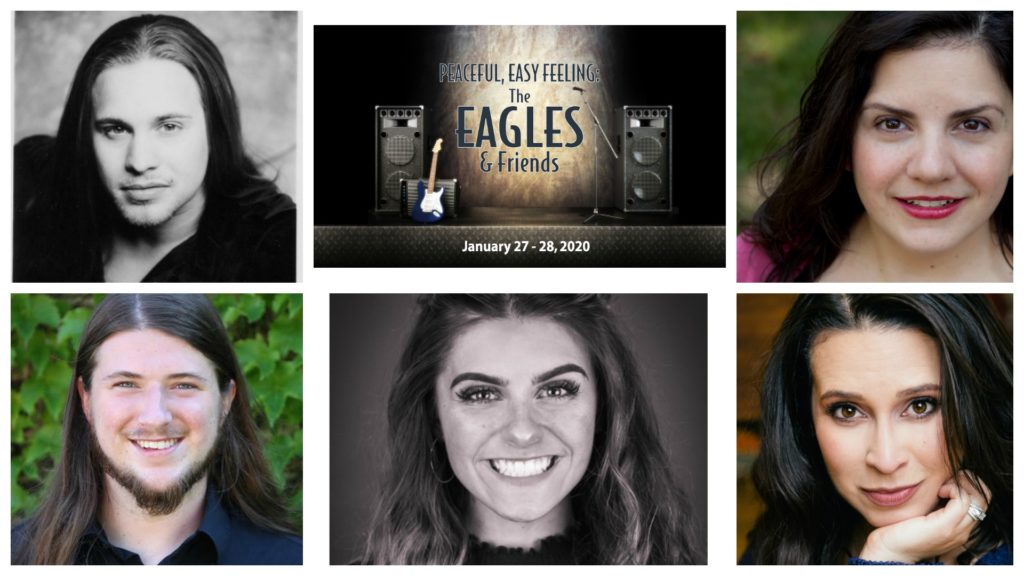 It’s no wonder that tickets are flying out the door for this one! One of the best-selling bands of all time—the Eagles–plus Milwaukee’s busiest performers guarantees a remarkable evening of entertainment. We’ll Take it to the Limit with this cast:

MADDIE CHEREK, our Rising Star, is a senior at Greenfield High School. Active with the Christian Youth Theater, her credits include ELF, JR. (Jovie), THE WIZARD OF OZ (Dorothy), MARY POPPINS (Mrs. Banks), and BEAUTY AND THE BEAST (Babette).

KAREN ESTRADA’s acting credits include work with Renaissance Theaterworks, Next Act, In Tandem Theatre, Skylight Music Theatre, and Milwaukee Opera Theatre. She is a proud three-time alumna of Disney on Classic (Japan and Taiwan). Directing credits include Renaissance’s Brinks Briefs, Chamber Theatre’s Young Playwright Festival, and First Stage’s world premiere, ON THE WINGS OF A MARIPOSA.

With a BFA in Finger-Style Guitar from UWM’s Peck School of the Arts, CASEY OLSON has become a favorite on both of the Sunset stages. Musical MainStage and SideNotes Cabaret credits include YOU’VE GOT A FRIEND: A TRIBUTE TO CAROLE KING & JAMES TAYLOR, HOMEWARD BOUND: SIMON AND GARFUNKEL, BILLBOARD’S BEST, DON’T THINK TWICE IT’S ALL FOLK, and SOUNDS OF SOUL.

RANA ROMAN is delighted to return to the Musical MainStage series (and we’re excited that she’ll be right back for its next concert, a tribute to Broadway’s Hal Prince)! Recent credits: Mrs. Cratchit in A CHRISTMAS CAROL with the Milwaukee Rep, Mami in ON THE WINGS OF A MARIPOSA at First Stage Children’s Theatre, and Kate/Lilli in KISS ME KATE for the Skylight Music Theatre.

We also have Kerry Hart Bieneman on the keys, Tim Karth on drums, Bob Monagle on guitar, plus Bob Hirschi and Susan Loveridge doing their usual play-by-play thing. See, we told you it was going to be great?! So, don’t Take it Easy–grab those last few tickets!