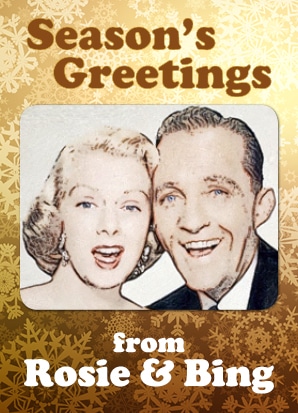 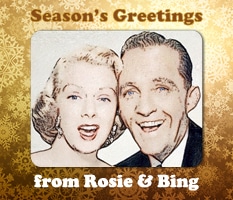 AT THE SIDENOTES CABARET

Award-winning vocalists ELLEN WINTERS and JOHNNY RODGERS welcome the holiday season with music and memories in SEASON’S GREETINGS FROM ROSIE & BING at the SideNotes Cabaret, December 12-16, 2018, in the Studio Theatre of Sunset Playhouse in Elm Grove, Wisconsin.

WINTERS and RODGERS reunite after their smash hit cabaret ELLA MEETS MEL, this time in a tribute to Rosemary Clooney and Bing Crosby, written and directed by PEGGY PETERSON RYAN. Backed by a top-notch combo of Sam Steffke on piano, Steve Rindt on bass, and Jim Ryan on drums, audiences will be treated to timeless duets, seasonal favorites, and many of Rosie and Bing’s signature songs.

ELLEN WINTERS has appeared at Sunset Playhouse many times in the SideNotes Cabaret and also as part of the Musical MainStage Concert Series, most recently in FRANK & ELLA & FRIENDS.  She has won numerous awards including Jazz Musician of 2017 from the Shepherd Express “Best of Milwaukee.”  Winters is sought after as a vocalist and cabaret singer throughout southeastern Wisconsin and the U.S., and also works as a clinician, adjudicator, and arranger.  JOHNNY RODGERS is an internationally-celebrated singer, songwriter, pianist, Broadway star, and recording artist.  He has been described as an “Ambassador of American music” and has won songwriting awards from the Billboard and The Great American Song contests, as well as the ASCAP Foundation. Rodgers spent several years touring with Liza Minnelli as a featured singer, dancer, and pianist and continues to tour the world presenting concerts and cabarets.

Writer/Director PEGGY PETERSON RYAN is well-known to audiences from her many appearances with local theatre companies and from her work with the SideNotes Cabaret Series since its inception in 2008.  In addition to her work onstage and behind the scenes, she also has served as playwright and lyricist for the production of VICTORY FOR VICTORIA at Milwaukee Opera Theatre.

Music Director SAM STEFFKE is a three-time WAMI award-winning pianist and a graduate of Berklee College of Music.  He plays with several local bands and maintains a teaching practice. Double bassist STEVEN RINDT is a freelance bassist with the Wisconsin Philharmonic and Festival City Symphony and with several classical and jazz groups. Drummer JIM RYAN has been playing regionally for decades, appears regularly with big bands and smaller combos, and maintains a private drum instruction studio.

Performances of SEASON’S GREETINGS FROM ROSIE & BING are Wednesday, December 12 through Saturday December 15 at 8:00 p.m. and Sunday, December 16 at 3:00 p.m.

Sunset Playhouse is celebrating its 59th season and, in addition to the six SideNotes Cabarets, offers eight productions in the Furlan Auditorium, six Musical MainStage concerts, four shows in the new After Sunset series, and three shows in the bug in a rug Children’s Theater series.  To reserve tickets, call 262-782-4430 or visit sunsetplayhouse.com. For group sales, contact Stephanie at 262-782-4431, ex. 291. 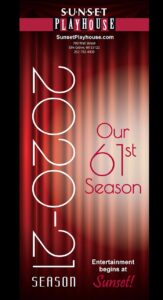