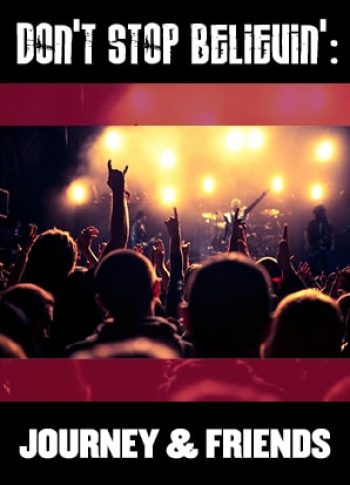 We’re going to rock the house as we Journey through Styx, Foreigner, Aerosmith, and more of your ’70s and ’80s favorites.

ELISABETH ADAM, Rising Star – Elisabeth is honored to return to Musical MainStage for the third time, following her appearances in BARRY AND BETTE and 100 YEARS OF MOVIE MUSIC. She is a recent graduate of Wauwatosa West High School where favorite productions include THE LITTLE MERMAID (Ariel) and INTO THE WOODS JR. (Baker’s Wife). In the fall, Elisabeth will begin her studies in Music Therapy at Concordia University.

RYAN CHARLES, Performer – Ryan’s a regular on both our professional stages: ELVIS, MOTOWN, SOUNDS OF SOUL, EAGLES, SGT. PEPPER for this series and LEGENDS OF AMERICAN ROCK for the SideNotes Cabaret. Other credits include In Tandem Theatre (JESUS CHRIST SUPERSTAR, CARNIVAL); Skylight Music Theatre (LES MIS, PIRATES OF PENZANCE); The Boulevard Theatre (TWELFTH NIGHT, THIS IS OUR YOUTH); CBINT (KING DAVID, JOSEPH…); and Greendale Community Theatre (JESUS CHRIST SUPERSTAR, ROCK OF AGES.) With a BFA in Musical Theater from UW-Stevens Point, Ryan has spent a decade as the lead singer of local rock band Independent Idols.

BOB HIRSCHI, Narrator – With a long history of credits as both actor and singer, Bob is always delighted to return to the Musical MainStage co-pilot chair. He also performs with the nine-piece classic rock cover band Groove Therapy.

TIM KARTH, Percussion – With a BS in Music Education from Carroll University, this busy musician has been gigging since 1988. By day he works for Hal Leonard Music Publishing. Besides the Playhouse, Tim regularly performs with BtW Productions, Radio Rosies, and Four Guyz in Dinner Jackets. A proud alumnus of the Kids from Wisconsin, he keeps busy as a worship drummer and Technology Coordinator for his church, the U.M.C. of Whitefish Bay.

JACK KOSHKIN, Guitar/Keyboard – A multi-instrumentalist who loves nothing more than performing, Jack recently returned to his hometown of Milwaukee after an extensive stint in Germany. In the fall, he will begin his studies at UWM while managing his own band, Fightin’ Bob, and serving on the board of a musical non-profit he helped create.

RANA ROMAN, Performer – Milwaukee native and proud graduate of Milwaukee High School of the Arts, Rana is delighted to return to the Musical MainStage series. Recent area credits include Mrs. Cratchit in A CHRISTMAS CAROL (Milwaukee Repertory Theatre), Mami in ON THE WINGS OF A MARIPOSA (First Stage Children’s Theatre), Kate/Lilli in KISS ME KATE (Skylight Music Theatre), and Ella in LIFE SUCKS at Forward Theater of Madison, where she is also a member of its Advisory Company.

Also: Jim Loveridge, Peggy Peterson Ryan, and the Sunset Playhouse board and staff