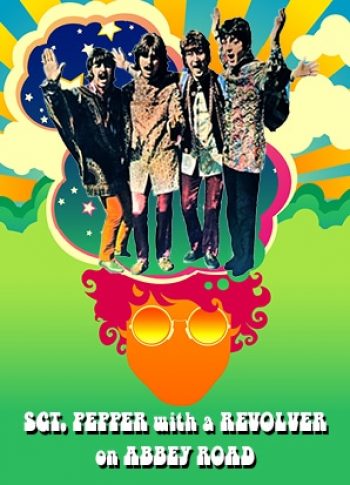 SGT. PEPPER WITH A REVOLVER ON ABBEY ROAD

Important Note: Do NOT purchase seats next to someone who is not in your party.  For a single ticket, or an odd number of tickets, please call the Box Office at 262.782.4430

Fifty years ago, the greatest band of all time conceived and recorded three of the most revolutionary albums in music history. We’ll revisit the best of the best from Revolver (August, 1966), Sgt. Pepper’s Lonely Hearts Club Band (May, 1967), and Abbey Road (September, 1969). This one’s a DON’T-MISS!

RYAN CHARLES, Performer – Ryan’s a regular on both our professional stages: ELVIS, MOTOWN, SOUNDS OF SOUL, EAGLES for this series and LEGENDS OF AMERICAN ROCK for the SideNotes Cabaret. Other credits include In Tandem Theatre (JESUS CHRIST SUPERSTAR, CARNIVAL); Skylight Music Theatre (LES MIS, PIRATES OF PENZANCE); The Boulevard Theatre (TWELFTH NIGHT, THIS IS OUR YOUTH); CBINT (KING DAVID, JOSEPH…); and Greendale Community Theatre (JESUS CHRIST SUPERSTAR, ROCK OF AGES.) With a BFA in Musical Theater from UW-Stevens Point, Ryan has spent a decade as the lead singer of local rock band Independent Idols.

JOEY CHELIUS, Performer – In the fall of 2013, Joey was a Musical MainStage Rising Star! Now a graduate of the 2018 BFA-Acting Class at UW-Stevens Point, Joey spent the 2020-21 season as an Emerging Professional Resident actor with the Milwaukee Repertory Theater. He is ecstatic to return to the Playhouse, where he last appeared in the 2019 production RABBIT HOLE. Other recent credits include BEING EARNEST (Jack) at Skylight Music Theater, MIRACLE ON 34TH STREET (Fred) with Forte Theatre Company, and the guitarist in HEDWIG AND THE ANGRY INCH with All In Productions at Next Act Theater.

BOB HIRSCHI, Narrator – With a long history of credits as both actor and singer, Bob is delighted to be back in the Musical MainStage co-pilot chair. He also performs with the nine-piece classic rock cover band, Groove Therapy.

TIM KARTH, Percussion – With a BS in Music Education from Carroll University, this busy musician has been gigging since 1988 and works for Hal Leonard Music Publishing. Besides the Playhouse, Tim regularly works with BtW Productions, Radio Rosies, and Four Guyz in Dinner Jackets. A proud alumnus of the Kids from Wisconsin (89-90), he keeps busy as a worship drummer and Worship Technology Coordinator for his church, the U.M.C. of Whitefish Bay.

CASEY OLSON, Performer – With a BFA in Finger-Style Guitar from UWM’s Peck School of the Arts, Casey was a finalist in the Sharon Lynne Wilson Guitar Competition. He currently lives and works in the Madison area as a music arranger, transcriptionist, and copyist for Musicnotes Inc., where he helps create and prepare sheet music for sale online. Sunset Musical MainStage and SideNotes Cabaret credits include YOU’VE GOT A FRIEND: A TRIBUTE TO CAROLE KING & JAMES TAYLOR, HOMEWARD BOUND: SIMON AND GARFUNKEL, BILLBOARD’S BEST, DON’T THINK TWICE IT’S ALL FOLK, SOUNDS OF SOUL, and PEACEFUL, EASY FEELING: THE EAGLES AND FRIENDS.