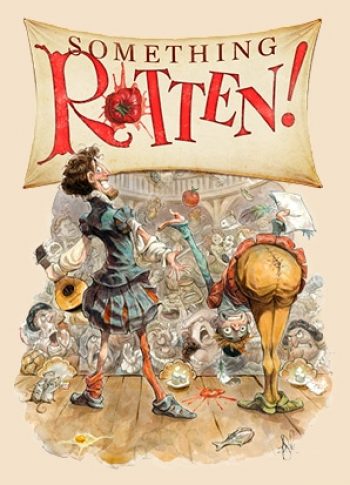 Tickets for THIS production will be on sale starting March 1, 2022.

Welcome to the Middle Ages! Set in 1595, the hilarious SOMETHING ROTTEN! tells the story of brothers Nick and Nigel Bottom, desperate to write a hit play but stuck in the shadow of that Renaissance rock star known as “the Bard.” When a local soothsayer foretells that the future of theater involves singing, dancing, and acting at the same time, the boys set out to write the world’s very first musical. But in the scandalous excitement of opening night, the Bottoms realize that reaching the top means being true to thine own self–and all that jazz.

With its heart on its ruffled sleeve and sequins in its soul, New York Magazine calls SOMETHING ROTTEN! the “funniest musical comedy in at least 400 years!”

With big song and dance numbers and a wacky cast of over-the-top characters, the musical received show-stopping standing ovations from Broadway audiences—from the top of the first act!