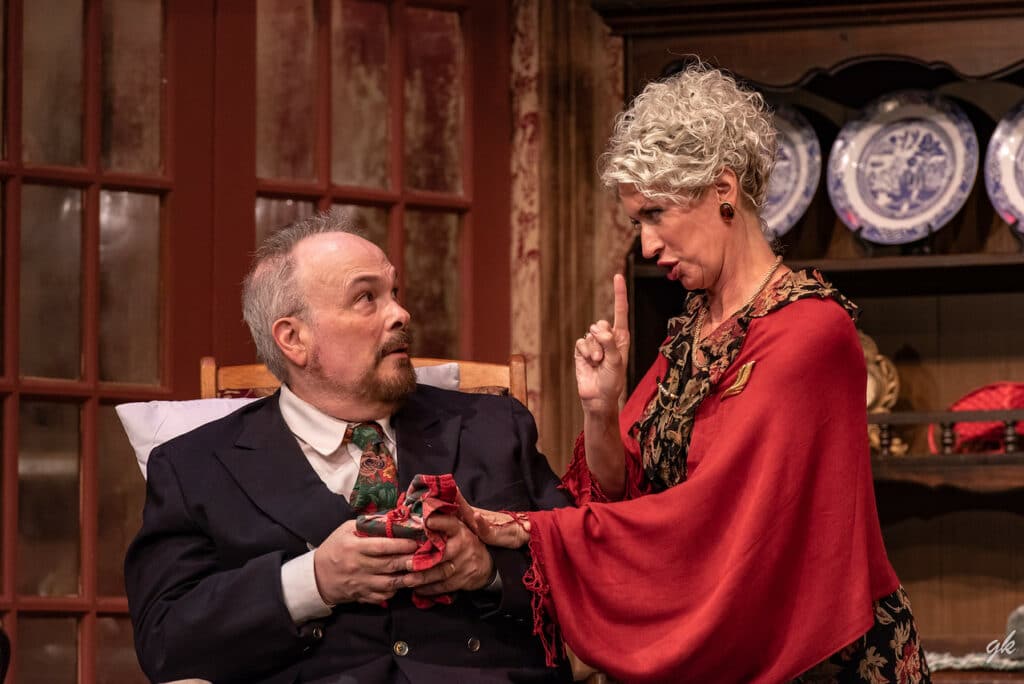 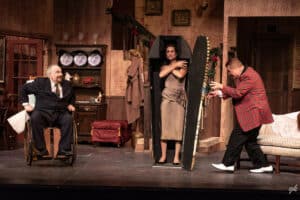 The Moss Hart and George S. Kaufman comedy “The Man Who Came to Dinner” is a classic with its bucket list lead role of Sheridan Whiteside.

Hal Erickson can check this plum role off his list with a highly entertaining portrayal of the cantankerous Whiteside, a popular 1930s radio personality who slips on the ice in front of well-to-do family’s home in a small Ohio town and recuperates inside. Erickson has been feasting on these sorts of comedic roles, including the role of Grandpa in another Sunset Hart-Kaufman comedy, “You Can’t Take It With You,” which also had Brian Zelinski as the director. Erickson displayed his comic chops as well in Sunset’s “Any Number Can Die,” as the detective.

Erickson sets the tone for this wacky show, with his Whiteside character dominating just about every scene to great comic effect. Whiteside turns the household of the Stanleys, fans of Whiteside who was arriving for dinner when he fell, upside-down as he orders everyone around. He invites a myriad of zany pals into the house, which provides a number of amusing scenes.

At first, we don’t even see Whiteside, but hear him off in another room, railing at his doctor, nurse and everyone else within earshot. Mrs. Stanley (Rebecca Janny) is delighted to have the demanding celebrity staying in her home, while her husband (Thomas Van Gilder) resents his family being treated like unwelcome boarders.

Few in Whiteside’s orbit escape his acerbic tongue. When his nurse (Lindsay Greiwe) clutches the back of his wheelchair, he spouts: “Take those clammy hands off my chair. You have the touch of a sex-starved cobra.” Of his doddering doctor (Doug Smedbron), he says: “Dr. Bradley is the greatest living argument for mercy killing.”

Whiteside’s longtime secretary Maggie (Tanya Tranberg) puts up with his sarcasm and scheming – “I know what a devil you can be,” she says. But when Bert, a handsome local newspaperman, insinuates himself into the household to interview her boss, she is smitten. Whiteside calls her infatuation “temporary insanity,” and cons a lovely actress named Lorraine (Kat Zilka) into seducing Bert to keep Maggie from leaving his employ.

Along the way, Whiteside manages to recklessly advise the Stanley children (Emma Losey and Declan Swayne); receive a whole passel of gifts, including cockroaches, penguins and a sarcophagus; and order the Stanleys around, telling them the phone and several rooms are for his use only.

Some 80 years later, this whole scenario is still very funny. 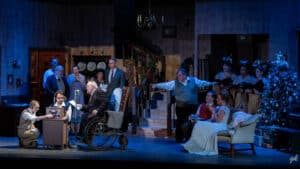 This cast of 22 pulls off the comedy nicely, but Erickson and his onstage compadres are in a class by themselves. Corey Klein as Professor Metz starts the parade of Whiteside visitors, bearing a gift of a tank full of cockroaches. But the comedy reaches a whole new level when British actor Beverly Carlton (Mike Owens) sashays in to visit Whiteside. Owens is marvelous in his depiction, with his theatrical terms of endearment and flourishes. He tells tales that are mesmerizing, dropping names as when he says, “I was then ushered, in my lemon silk drawers, into a room full of Norma Shearer, Claudette Colbert and Aldous Huxley.” His character is supposed to be based on Noel Coward and Owens delivers it to perfection.

On Christmas Day, Whiteside’s buddy, a comedian called Banjo (Jim Stahl), makes a memorable visit and the scene is nonstop schtick, ala the Marx Brothers (his character is modeled after Harpo Marx), hilariously performed by Stahl.

Tranberg does a good job as Maggie, verbally dueling with her irascible boss and usually not losing the battle. Playing her love interest, Bert, Matt Zembrowski is sincere and likable, a calming influence in the stormy household.

Other characters were generally well done on opening night. Leslie Johnson as Mr. Stanley’s sister could perhaps have seemed creepier or deranged in her portrayal, especially in light of what we learn about her eventually.  There is also one bit when a crew comes to do Whiteside’s live radio broadcast on Christmas Day in the Stanley home. With Lorraine in the living room, a crew member sets up and is obviously taken by the lovely actress, pausing a couple times to drink her in with his eyes as he leaves. The silent scene fell flat with the opening night crowd and created an unneeded break in the flow of the comedy.

Despite that, this comedy had great pacing, due mainly to Erickson’s quick quipping and well-placed inflections that range from indignant to sarcastic, from bombastic diatribes to dismissive baby talk.

Scenic designer Matthew Carr has created a handsome set, befitting a family of means, and doors to a number of areas that serve the show well. Jan Pritzl’s sound is flawless, allowing audiences to not miss any of the Moss-Hart dialogue

Moss and Hart based the protagonist on Alexander Woollcott, a theater critic who once stayed at Hart’s estate bullying the staff and making himself obnoxious. Woollcott’s behavior led them to create the Whiteside character and the foundation for “The Man Who Came to Dinner.”