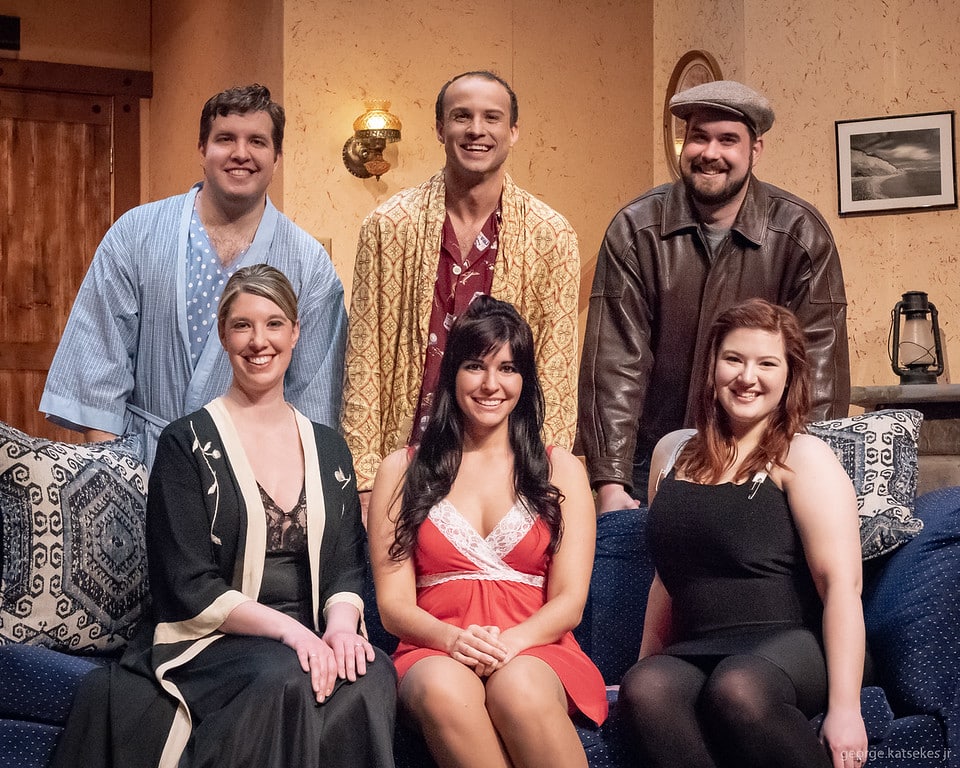 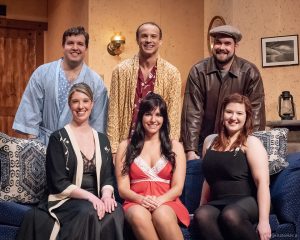 Everyone loves the Abbott and Costello “Who’s on First” skit with its cascading array of misinterpretations.

Imagine a similar bit going on for a little over 100 minutes, adding lies, purposeful confusions, hidden infidelities, as well as a host of misinterpretations, and you have the heart of “Don’t Dress for Dinner.”

The show, Sunset Playhouse’s current offering, is a dizzying series of farcical conversations meant to cover up a couple of affairs. Sunset’s cast, under the direction of Michael Pocaro, has successfully met this monumental challenge thanks to an ensemble of six who can handle the quickly developing situations and snappy dialogue expertly.

I realized early on that the show is remindful of “Boeing, Boeing,” which Sunset also successfully staged in recent years. The similarities are due to the fact that Marc Camoletti wrote both shows. Robin Hawdon adapted “Don’t Dress for Dinner.”

While “Boeing, Boeing” relies a lot on the classic farce device of people hiding behind and popping out of doors, “Don’t Dress for Dinner” is almost strictly a linguistical romp. Time and again the characters must utter a whole series of misunderstandings to cover up for themselves or someone else.

The story is set in 1960 in a country home – actually quite a tastefully renovated farmhouse – outside of Paris. Married couple Bernard (Keith R. Smith) and Jacqueline (Lori Nappe) are preparing for Jacqueline to spend the weekend away with her mother. Meanwhile, Bernard has invited his mistress Suzanne (Allison Chicorel), while his wife is gone, and arranged for Suzette (Ella Folkerts) from an agency to cook a romantic meal. Bernard’s friend Robert (Tyler Peters) has also been invited, as an alibi.

The plan looks like a good one for Bernard, until Jacqueline learns that Robert – who ironically happens to be her secret lover — is spending the weekend with Bernard. So, Jacqueline cancels her weekend with her mother in order to reunite with Robert.

Bernard finds out too late that his wife will not be gone for the weekend, but his friend as well as his cook and his lover are all on their way to his home with no chance of anyone’s stopping their arrival (these are the days before cell phones!).

Bernard convinces the unattached Robert to pretend that Suzanne is actually his – Robert’s– girlfriend, which sends Robert into a tizzy as he had hoped to share a secret liaison with Bernard’s wife that weekend. Complicating the complicated matters, Robert mistakes the cook Suzette for Bernard’s mistress Suzanne. And so on and so on.

While there’s lots of movement, most of this show’s comedy comes from the witty dialogue and fast-paced repartee. When Bernard asks Robert, “Is the coast clear?” he responds, “I don’t know about the coast, but it’s darn foggy around here.” 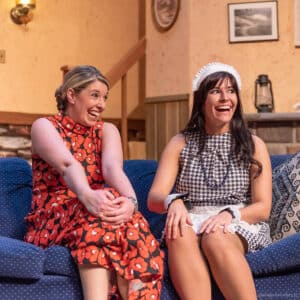 Director Pocaro has the players in a near constant state of motion, taking on all sorts of poses all over the couch and all over the room. Their movements are purposeful as they strut and run around the ample living room, ramble up and down the stairs, saunter into the kitchen or off to bedrooms that were once a cow stall and a piggery, stop frequently at the bar for libations and cower at accusations. There is not a dull moment as the attempts to mask the infidelities create a mountain of lies and some of the most preposterous conversations and situations, which end up with the men getting pummeled and even – in Bernard’s case – battered with a variety of liquids, prompting him to deadpan that he’ll “put on (his) wet suit.”

This is an amazing ensemble cast, with my favorites being Peters’ Robert and Folkerts’ Suzette. The two are perfectly cast and easily handle all the tricky dialogue and physical comedy. Their loopy tango – at which point Suzette is believed to be Robert’s niece — during the dinner party to open Act II is great fun. In that scene, Suzette is told to pretend she is Robert’s niece, which moves her to deliciously deliver the line: “You’re quite a dishy hunk, unc.”

Peters is perfect as Robert – expressive, but not so much as to look cartoonish. At one point his adept retelling of a laundry list of lies elicited applause from the audience.

Folkerts’ cook character is asked to play several characters – for which she insists on money up front from Robert and Bernard in a funny running bit – in order to conceal the affairs. Folkerts whisks among her dinner party incarnations with great comedic flair, at one point telling her employers: “I should get an Oscar for this.” Indeed.

Smith and Nappe as Bernard and Jacqueline are also quite adept. I loved their characters’ straight-faced confessions looking out at the audience, stock-still, in Act II, a perfectly timed pause — albeit short one — in all the madcap madness that only added to its effectiveness.

I’ve seen Chicorel, who played Bernard’s model-girlfriend, play this sort of role a number of times and she is always spot-on with her timing and audience engagement, just as she is here, jockeying between moments of bemusement and lividity. Nick Zuiker as Suzette’s husband George makes a brief, but pivotal appearance toward the end of the show that really wraps things up nicely.

Nick Korneski and Matthew Carr designed a good-looking, wide open stage, adding stone accents for the farmhouse feel and allowing performers lots of room to roam and romp. And they needed every inch of it.

What: “Don’t Dress for Dinner”